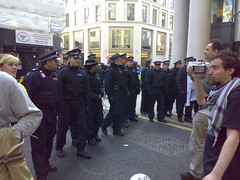 Everything was on a lot smaller scale this today and the skirmish I was caught up in around 4pm was only 50 or so protesters and the police weren’t even in full riot gear. The slightest disturbance got a loud reaction from other protesters and there was certainly a lot more noise than action, which is a good thing in those circumstances. I eventually made my way through the police lines to Bank and was able to watch as police moved in to dislodge the protesters from in front of the Royal Exchange but it looked like a slow and unequal struggle with only one outcome so I left them to it and found a bus as Bank station was closed. I’m not going to stick my neck out too far but I’m assuming tomorrow will be quiet. Yes? 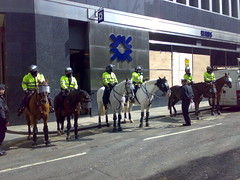 There’s some tension in the air around Bank if you care to feel it. Police are stopping and searching anyone who looks too suspicious for their liking and the police I spoke to didn’t think it was all over just yet. The police helicopter was just hovering over the Liverpool Street area but it seems unlikely that we’ll see anything on the scale of yesterday as the protesters don’t seem to be that organised, particularly when contrasted with the police. 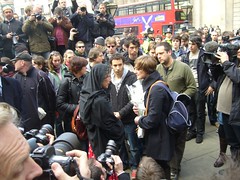 At 1pm there was a short ceremony to remember the man who died during the protests yesterday, who was himself a protester. The circumstances surrounding his death will no doubt be examined over the coming days but I hope it won’t turn into a political football. Just around the corner police horses were lined up in front of the boarded-up windows of the RBS building (picture top) which was attacked by protesters yesterday and you can find pictures for this and more on my Flickr page and Twitter updates (right)

UPDATE @ 11.16am: Police believe that there may be a demonstration planned in the Bank area for 13.00 today and they will be attending.

UPDATE @ 9.30am: The demo’s now been rerouted away from the City.

I thought it might be quiet in the City today but it’s not to be because 11.30 will see the “Youth Fight for Jobs” demo starting from Tooley Street and going through the City on the way to the Excel Centre. The demo will pass through Tooley Street, Southwark Bridge Road, Queen Street, Cannon Street, Queen Victoria Street, Mansion House Place, Lombard Street, Gracechurch Street, Eastcheap, Great Tower Street, Lower Thames Street and the cobbled area by the Tower of London before going on to the Excel Centre.

It’s not known how well attended it will be but the police will obviously be there… any demo with the words “Youth” and “Fight” in it is bound to raise some concerns!

First the “war” protest moved of down Moorgate as planned with the red horse of war keeping up the “Four Horsemen of the Apocalypse” theme.

Next the Liverpool Street march was redirected down London Wall and then made its way down Moorgate to the Bank. 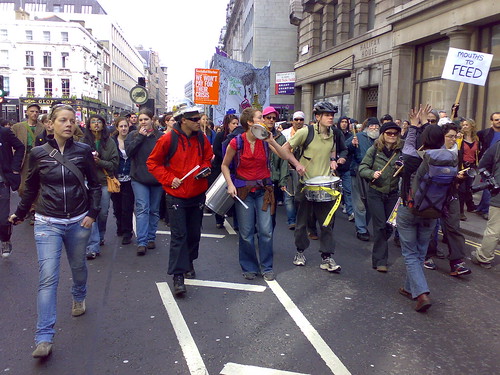 All the marches seem to have met up at Bank now and although there’s been a little pushing and shoving there’ been no outbreak of violence yet, though it may just be a matter of time. 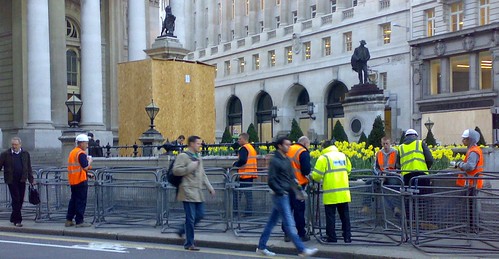 The sun has risen brightly over the City today with barriers and the statue boarded up at Bank, which is due to be the hub of the G20 Meltdown protest at lunchtime. 9am is due to see the Critical Mass cycle ride from Bank but I’m not anticipating much, if any, trouble from that. Carphone Warehouse are expecting trouble though and have boarded up their shop by Moorgate station, where one of the four prongs of the G20 Meltdown march is due to congregate from 11am. 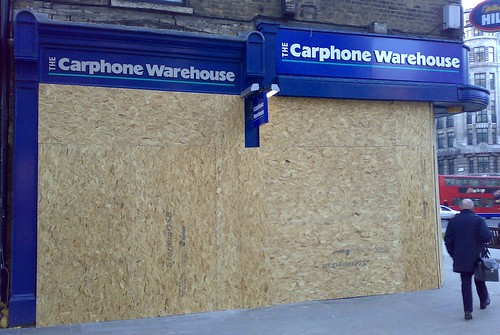 I hope to be out and about in a while bringing news and pictures but in the meantime if you’re in the City and have a copy of the Metro look for the excellent April Fool adverts from BMW and Waitrose.

A little Police activity in advance of tomorrow with the Royal Exchange corner by Bank station being cordoned off to deal with a suspect package. The Police did a good job of not overreacting and kept the roads and stations open, which is hopefully a good sign for tomorrow. I got interviewed by a far-eastern news crew into the bargain but I’ve no idea which station they were from.

Well, the big day dawns tomorrow with the G20 protestors due in force. There was a small protest this morning down by the Bank of England which passed peacefully but I doubt that anybody’s going to lay a bet on tomorrow’s protests being trouble-free.

The Police have issued advice to City businesses and workers as to how to best protect themselves but if I have one thing to add it would be to plan a couple of other alternative routes home should it all kick off and your normal route home be closed. Seeing as I normally go to Bank Station I got my plans already laid.

If you want to know whether your office is likely to be targeted then Indymedia have a handy map which shows the locations of prominent companies and places. Mine’s on there so I’ll be stocking up on pepper spray to keep the oiks away from my snack drawer (i.e. another normal day in the office).

I hope to be out and about bringing you some photos and updates as long as we’re not barricaded in!

Well so far today I’ve had the disappointment of Ian Wright’s book signing being cancelled at the 11th hour and in the spirit of not turning up the SHAC protestors haven’t made an appearance either so today’s looking like I’ll have to give up on anything interesting happening and retire to the pub.

Or do some work.

I’ll let you know if there are any updates on either of the above.

UPDATE 1: 13:24 – A lone Policeman and some security people are waiting outside Moor House, apparently anticipating the arrival of the protest?

Everyone had cameras… the police, the protestors, the press, the curious… 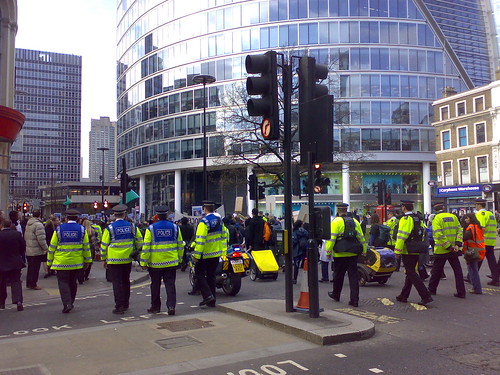