Fencing at a Crossrail development site in the City of London came loose in today’s high winds and struck a pedestrian.

An ambulance attended the scene of the incident outside Moor House on London Wall and treated the injured passer-by.

A spokesperson for Crossrail said:

“Due to high winds, a section of fencing surrounding the Crossrail worksite at Liverpool Street became dislodged this morning and came into contact with a passing pedestrian. Crossrail is investigating the incident.”

The fencing was later secured by the site contractor, Laing O’Rourke.

Did you see the accident occur? Did today’s extreme weather cause any other incidents? Yesterday’s demonstration of military versatility on the River Thames yesterday suffered an embarrassing hiccup when a hovercraft crashed into Blackfriars Bridge.

The Royal Marine Commando LCAC hovercraft was taking part in a number of displays as part of a capability demonstration by HMS Bulwark, currently moored at Greenwich.

The amphibious vehicle, used by 539 Assault Squadron Royal Marines, had been been going up and down the river as part of its demonstration when it was involved in an incident which damaged the starboard skirt. Mike Paternott, who works nearby and took these pictures, said it struck Blackfriars Bridge at about 2.40pm. Spectators from the Millennium Bridge watched as the damaged craft drifted onwards and was eventually towed away by two Marine fast boats. A planning application for a huge new office block in Broadgate for investment bank, UBS, has been submitted.

The 12 storey building at 5 Broadgate would have 700,000 square feet of office space and include 4 trading floors.

The plans have been put forward jointly by British Land and the Blackstone group. The building, which is cubic in profile, has been designed by Ken Shuttleworth at Make.

Current office blocks, 3, 4, and 6 Broadgate would make way for the huge development which would be adjacent to Exchange House.

British Land have outlined the public realm improvements that the office scheme will bring with it:

A new public route will be opened up east-west connecting Broadgate Circle with Sun Street Passage to provide a direct route to Liverpool Street Station and to Exchange Square to the north.  A new ‘gateway space’, known as Sun Street Square, with a café at the base of 3 Finsbury will be created to provide a new pedestrian crossing to Crown Place and the northern approach to Finsbury Avenue Square will be redefined with new landscaping. Sun Street Square and Sun Street Passage both present an opportunity for the incorporation of public art, including an ‘art wall’.

Get more information and see an artist’s illustration at Offices.org.uk

Reports say that the firm will be building a brand new landmark HQ at the old site of Bucklersbury House on Walbrook. Foster and Partners have been selected, those same reports say, to design the building which will have half a million square feet of office space.

Bloomberg are currently based at offices in Finsbury Square, in the City. 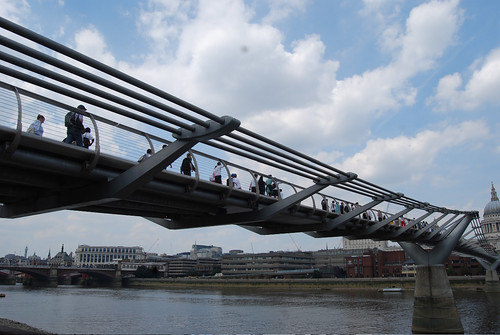 The Millennium Bridge will be closed for four days next week to allow for inspection.

The bridge was opened in 2000 and quickly became known as the Wobbly Bridge. Work was undertaken to and it reopened without its Wobble in 2002.

Emergency services were called after a fire broke out at a block of flats in Cock Lane last Thursday.

Two fire engines and ten fire fighters from Dowgate and Clerkenwell stations attended the blaze at the six-storey block. They were called out at 21.23 and had the fire under control by 22.15.

Thirty residents were evacuated from the building and there were no injuries.

Bow Bells House on the City of London’s Cheapside has been sold for over £100million, according to a report by Bloomberg.

The 165,000 sq ft building was designed by Architects David Walker and HOK International and it was only completed in late 2007.

A private investor has apparently purchased the building, which is adjacent to St Mary Le Bow Church, from Mitsubishi Estate Co. and Mitsubishi Corporation for $213million. A new board game called “City of London” has been launched in aid of Lord Mayor’s Appeal Charities. In it, your aim is to become the Lord Mayor of London, and to do that you secure ward seats, win elections, become a Freeman and more before getting to the top job at the Mansion House.

Multiple choice questions about the Square Mile need to be answered in order to progress through the game, with the 25 wards, the Old Bailey and the Guildhall all featuring on the attractive board.

The Lord Mayor’s two charities that will benefit from the sale of the game are St John Ambulance London (Prince of Wales’s) District and The Lord’s Taverners.

Designed for 2-4 players aged 10 and above, ‘City of London’ is available at the special price of £25.00 if ordered in advance via www.lordmayorshow.org and collected from The Mansion House, or at the retail price of £29.99, post free. It’s also available from Guildhall’s Library and Art Gallery shops, St Paul’s Cathedral shop and, from August, at John Lewis and Peter Jones in London.

Ian Pay, The Lord Mayor’s Appeal Director says, ‘We think that ‘City of London’ is the perfect gift for anyone interested in the City of London or who professes to be an expert on the ‘Square Mile’. It’s also a great way of supporting two hugely worthwhile charities, discovering facts about the City and having fun at the same time.’

An impressive freehold building at 27-55 Poultry, the former headquarters of the Midland Bank, has been put on the market with Knight Frank appointed to handle the sale.

Planning permission had been received to turn the building into a hotel, but when the owners, Poultry Developents Ltd, defaulted on a loan, administrators were called in.

A City worker who died whilst rescuing an 9 year boy who had fallen into a canal will be honoured today at Postman’s Park.

Leigh Pitt worked for outsourcing company Williams Lea at Merrill Lynch and was aged 30 when he died in the accident two years ago. It happened in the Broadwater Dock canal in Thamesmead, near Leigh’s home.

“Postman’s Park”, as it is known, celebrates the herorism of ordinary people who lost their lives saving other people and is is located between King Edward Street, Little Britain and Angel Street.

The new plaque being laid will say:

Hat tip to the Evening Standard