THE NEXT Lord Mayor of London may not start Lord Mayor’s Day on board the Queen’s row barge Gloriana as recent predecessors have.

An ancient tradition of carrying the City of London’s new mayor down the Thames on a barge has been revived in recent years after Gloriana was built for the Queen’s Diamond Jubilee in 2012.

But the cost of using the privately-owed vessel for the procession rocketed more than fourfold last year, minutes from the AGM of the Traditional Thames Rowing Association show.

The Traditional Thames Rowing Association organise the colourful flotilla, as well as other events on the Thames throughout the year using Thames cutters. The cost to the TTRA of using Gloriana on the morning of the Lord Mayor’s Show was £1,200 in 2013 but leaped to £5,000 in 2014.

The TTRA’s treasurer warns that if the price remains that high, Gloriana may have to be “dropped”.

If Lord Sterling [Gloriana’s owner] seeks a similar payment this year (and I have no reason to think that he will not do so), then either the use of Gloriana will have to be dropped or a philanthropic funder will have to be found or subscriptions will have to be raised or there will have to be a much heftier entry fee for the LMS (or some combination of the last three options).

The City of London made a £1,000 contribution towards the cost of using Gloriana in 2014.

The famous Lord Mayor’s parade entertained crowds on wet City streets yesterday Fiona Woolf became the new Lord Mayor of London, only the second time a female has held the post in its long history. But the new Lord Mayor’s day started with by being aboard the Queen’s row barge Gloriana and leading a flotilla of Thames Cutters through Tower Bridge.

Gloriana then moored at HMS President – the home of the Royal Naval Reserve – and the new Lord Mayor enjoyed a historic rum ceremony before being whisked off to continue her busy day. 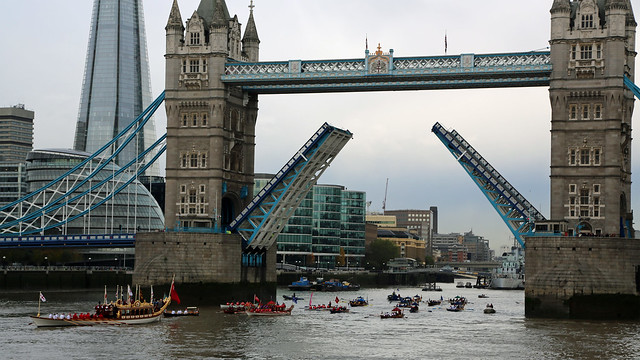 GLORIANA leading a flotilla through a raised Tower Bridge. 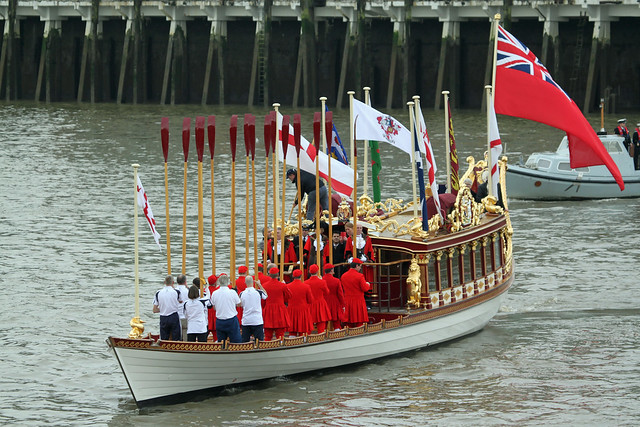 Rowers held their oars up as they reached HMS President. 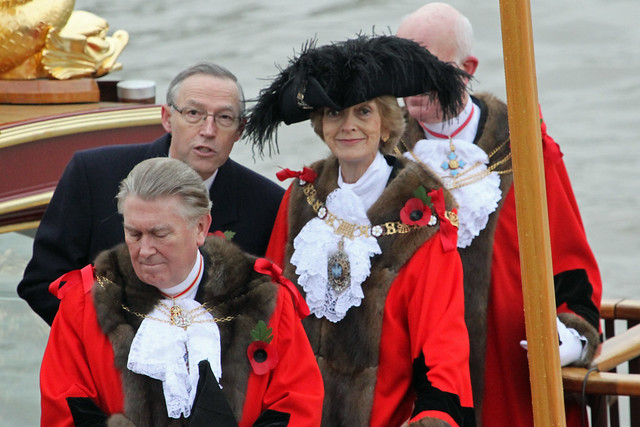 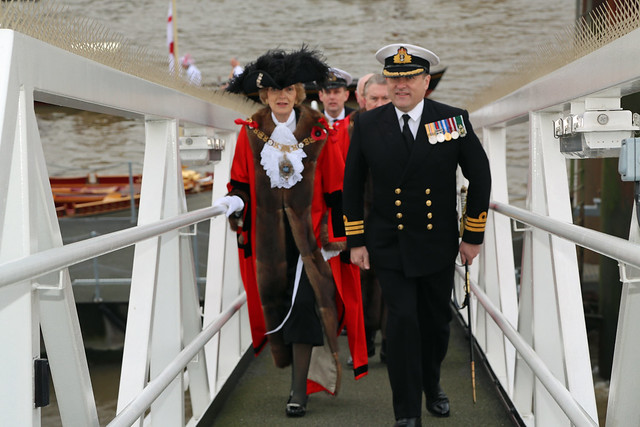 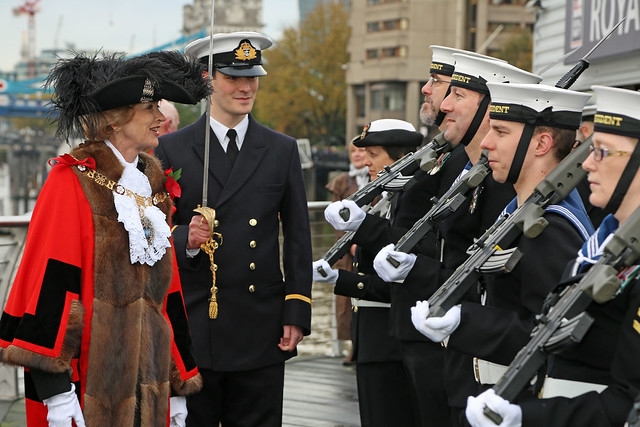 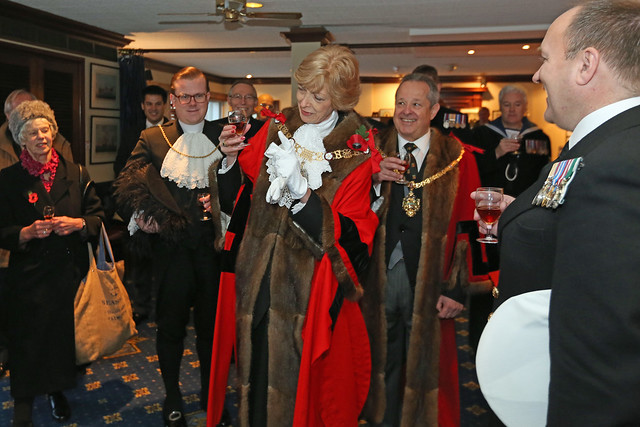 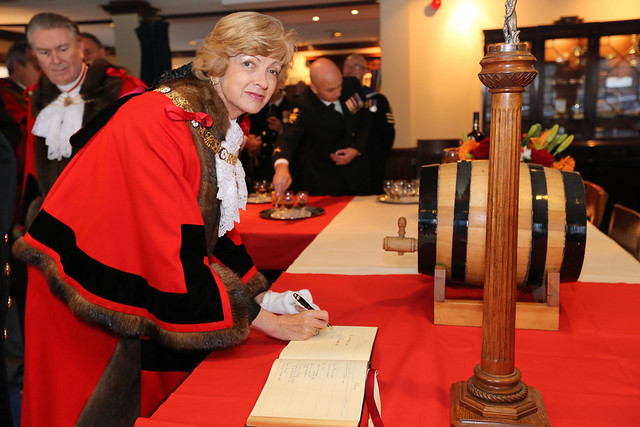 Before leaving HMS President, the Lord Mayor signed the guestbook.

Click here to find out more about the new Lord Mayor.

A NEW pre-letting deal has been announced that will see Amlin take 110,000 sq ft of office space in the Leadenhall Building.

The deal represents about 20% of the space in the new build at 122 Leadenhall Street which has acquired the nickname of the “Cheesegrater”.

Amlin, specialists in insurance and reinsurance, will take levels 18-24 and level 45 of the 47-storey building which is due to complete mid-2014 and is a joint venture between British Land and Oxford Properties.

Chris Grigg, Chief Executive of British Land said, “This significant second letting confirms The Leadenhall Building as a world-class building. We are very pleased to be in business with a company of the standing of Amlin, a market leader in the insurance sector.”

Paul Brundage, Executive Vice President, Senior Managing Director Europe of Oxford Properties said, “Our partnership with British Land at The Leadenhall Building has been a great success and this latest significant leasing deal with another prominent occupier evidences this. We look forward to welcoming Amlin to the building and fostering a long standing relationship with them.”

Charles Philipps, Chief Executive of Amlin plc said, “We are very pleased to be moving to The Leadenhall Building. It will be an uplifting new office for us in a building of high architectural quality and an unbeatable location directly opposite Lloyd’s Insurance market.”

The annoucement means that over half of the Cheesegrater has now been pre-let, with other tenants to include Aon.

Related: search for offices in the City of London. 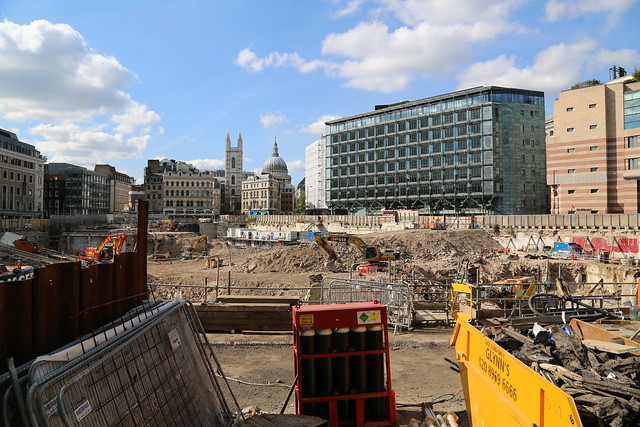 ARCHAEOLOGISTS working at  building site in the City of London have discovered what they have called the Pompeii of the North.

Up to 10,000 Roman items are believed to be at the site which has been preserved by the water-logged lost Walbrook river.

The location of the historically important discovery is the future Bloomberg headquarters which will be just off Cannon Street,opposite St Stephen Walbrook church.

The work has been carried by the Museum of London Archaeology and seen discoveries that date back to the entire time that the Romans occupied Britain.

When the new office and retail development is completed in 2016, the items will go on show at a new exhibition within the building.

You can follow MOLA’s progress on their own blog.

INTERNATIONAL insurance firm Markel are to move in to 20 Fenchurch Street, it has been confirmed.

The company will move from its current base in Leadenhall Street to the building dubbed the Walkie Talkie when it is completed in 2014.

William Stovin, president and chief operating officer of Markel International, said: “We have been at our current address for 11 years and now have the opportunity to upgrade to one of the best developments in the City.

“We are delighted that we have been able to agree terms for such a prestigious building which will provide us with the perfect headquarters for our continued growth both in the UK and overseas.”

20 Fenchurch Street developer Land Securities said in a trading statement released on Wednesday that 19 per cent of the space in the new skycraper has already been pre-let.

The company also stated that office space in its One New Change development was 94% let.

PROPERTY developer Hammerson has announced it will dispose of its office portfolio and instead focus on a retail strategy.

The company, which published its year end results for 2011 on Friday, said it would look to sell off its office properties in the medium term and concentrate on its retail portfolio which includes shopping centres such as Brent Cross in North London and the Bullring in Birmingham.

Hammerson owns several office developments in the City which it will be now looking for buyers for. These include 99 Bishopsgate, 1 Leadenhall C ourt, 125 Old Broad Street and 10 Gresham Street.

“Following the review of our strategy we will focus on being the best owner-manager and developer of retail property within Europe. Hammerson has created a retail business delivering outperformance from prime assets in winning locations. We now intend to sell our standing office investments over the medium term to maximise returns, redeploying capital into the retail sector to exploit our expertise and build on our existing scale. This will create efficiencies that lead to further cost savings and income growth from our portfolio.”

The station is now larger and more accessible following the rebuild, and is expected to be used by over 40,000 passengers a day.

The work was part of a larger redevelopment of Blackfriars station which will see it span both sides of the Thames.

Mayor of London Boris Johnson said today: ‘With its magnificent ticket hall, brand new lifts and escalators, and more than double the previous capacity, the rebirth of this central London station will improve the journeys of thousands of passengers every single day.

‘An incredible amount of hard work and expertise has been invested in these improvements, and Blackfriars is now set to become a truly world-class station.’

NEW serviced offices have been announced for Gracechurch Street in the City.

The new business centre is the latest in the Square Mile from technology focused office provider i2 Office.

The Milton Keynes-based company is growing rapidly: this will be its third facility in the City and it has just announced a new centre in Manchester and opened a new one in Greenwich.

Their latest City business centre will be on the ground and first floor of no 40 Gracechurch Street.

Philip Grace, CEO of i2 Office, commented: “Gracechurch Street will be a welcome addition to our nationwide network and further strengthens our London City offer.  We have seen high demand for our other centres in London, most recently with Aldersgate, filling up rapidly; we anticipate strong interest in Gracechurch Street.”

Khalid Affara of Arab Investments, who own 40 Gracechurch Street,  added: “We’re delighted to be working with i2 Office, who are clearly innovators in the serviced office market. Their demonstrable track record and recent success at Aldersgate will I’m sure see high occupancy at 40 Gracechurch Street very quickly. We look forward to working with i2 Office on this and at other London locations.”

The first pre-let has been announced for the under-construction Leadenhall Building.

Risk mananagement and reinsurance company, Aon, have agreed to rent almost 200,000 sq ft of office space over ten storeys in the Richard Rogers designed building which has already been nicknamed the “Cheese Grater”.

The building, which will be 47 storeys tall at completion, is a joint venture by British Land and Oxford Properties.

Robert Brown, CEO Aon Limited said, “We are delighted to have chosen The Leadenhall Building as our new London headquarters. The Aon Centre at The Leadenhall Building places us at the heart of the City’s insurance sector and the building’s impressive location and offices reflect our standing as the leading global professional services firm focused on risk and human capital management.

“The UK, and indeed London, remain an integral part of Aon Corp’s strategy. The decision to move to The Leadenhall Building confirms our commitment here and offers us an ideal platform to continue to grow our business and deliver the best of Aon to our clients.”

Aon are currently based in Devonshire Square.

The City of London’s iconic Tower 42 has been put for sale with a price tag of £290 million.

The tower at 25 Old Broad Street, originally known as the NatWest Tower, is one of six buildings in the City being put up for sale by owners Blackrock and LaSalle Investment Management.

When building of the tower was completed in 1980, it was London’s – and the UK’s – tallest building; a badge of honour it kept for ten years until it was overtaken by the One Canada Square at Canary Wharf.

PropertyWeek.com lists the other buildings up for sale as: